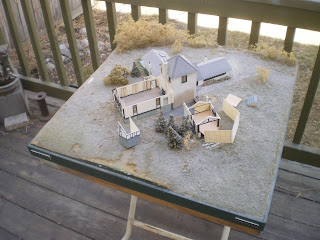 I started work on the Leighton Centre building with a series of on site surveys way back in August 2012.  Since then I have worked on it when time has permitted, interspersed with a few commission pieces.  Now that Marlborough Low Level Station has been completed and delivered, and I have taken some time to sit back and catch my breath, I am ready to get back to this Leighton challenge. This is how it looks right now; a bit under the weather.  I need to vacuum it all over, brush off the dust from the roofs and tidy up the landscaping.  Then I can sort out what's here and what's missing, and get back to the model itself.  So, stay tuned.
Post a Comment
Read more 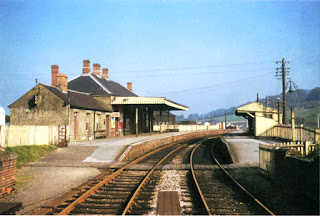 At a critical point in the development of any model building, it is important and useful to ‘test fit’ the main walls: to prove whether or not they are the correct size; to ensure the corners align correctly; and to get an overall sense of the mass of the building. Marlborough Low Level Station (MLL) is no exception. While I have already built an interior structure to glue the walls to upon final assembly, I have only two hands and they are insufficient for holding all the walls together temporarily to this structure to check everything. So, I built a custom jig. I used a spare piece of plywood for the base and various other pieces of Basswood to create a perimeter holding device. After a little bit of minor alterations I was able to fit the exterior walls and carry out that all important check list. And I am so glad I did. While they all fit fairly tightly together, the exercise highlighted that the tops of the walls need a little tweaking. There is a lead lined box g
2 comments
Read more 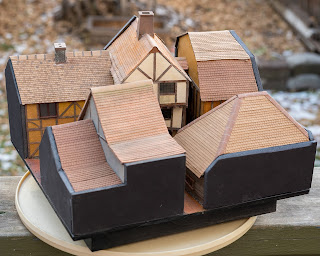 Earlier this year (2019) the CMRS (Calgary Model Railway Society) issued its annual modelling challenge: "Build anything you like to any scale on a 25cm x 25cm base."   I had had an idea to build this kind of diorama for many years but never had the right impetus to carry it out, so here was the opportunity to capture the day before a disastrous time in London. ------------------------------------------------------------------ London, Saturday 1 st September 1666 Some time during Sunday 2 nd September 1666, a fire began in Thomas Farriner’s bakery in Pudding Lane; it has long been rumoured that he did not douse a hot oven. Because the nearby buildings were so close together the fire spread very quickly and was soon out of control, and as a result thousands of families lost everything and were left destitute. The fire was only arrested four days later by the blowing up of buildings in its path, to create what we call today a “Fire Break”. 87 churc
1 comment
Read more 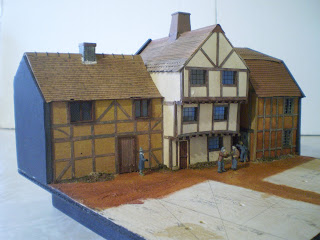 It's been a little under 11 years since I started this blog and today it surpassed 25,000 views. Many, many thanks to all who have visited but stay tuned because there will be more to come. The first posting was of a 1930s English cottage, which was from a drawing in one of my College text books so long ago I dare not look that far back;  it has not made any progress since then but it is still on my to do list. Coming soon will be a new diorama about Tudor London, a special white metal kit of a Single Brougham, and many more dioramas started but not finished. ------------------------------------------------------------------ Below are some hints of what is to come or might come The Tudor London diorama Modern London Railway Arches Marlborough Low Level Station on the long gone Midland and South western Junction Railway. A commission almost a decade on the back burner. A special light railway station in Salzburg
Post a Comment
Read more 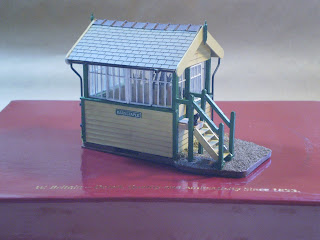 Barnstaple Signal Box The model from 4 different aspects. Terence Cuneo used a mouse as a signature; I use a black cat. ________________________________________________________ When I returned to this hobby of making models of buildings, about 20 years ago, I was pleased to keep it as a hobby; however, from time to time since then, a friend, or friend of a friend, has asked me to make something specifically for them. While this has been financially good for my little beer fund, the responsibility of making a model for someone else has at times been daunting. I recall that, among my many hospital visits, it took me about 5 years to complete 3 buildings for Peter Johnson. Well, such has not been the case in the latest “commission”. This has been about a 7 months’ project. In February 2019 I received an enquiry from out of the blue from Martin B.; he hails from Cork, Republic of Ireland and had been directed to me by a mutua
Post a Comment
Read more 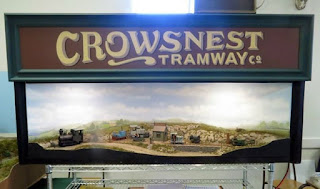 It is somehow fitting that I am adding this piece to my blog site almost exactly a decade after the death of Mike South; he who had such an interest in, and influence on this magnificent layout / diorama. The version seen here is the third by Roy C. Link that depicts a narrow gauge light industrial railway; he has built other versions to different scales. I know very little about the man, but others speak and write of him, and his modelling talents, with great admiration. I can certainly see his modelling skills are second to none because this layout is the best I have seen, by a long way. It is a triangular shelf style layout built to a scale of 1:32 ( ⅜ ”: 1’-0”), and measures approximately 3’ x 3’ x 4’-6” overall Everything is scratch built by Roy: the track, landscaping and general scenery, crumbling stone wall, the water column and hose, original single locomotive and wagons. It was begun in 1983 in Norfolk, England, but I still do not know how long
Post a Comment
Read more 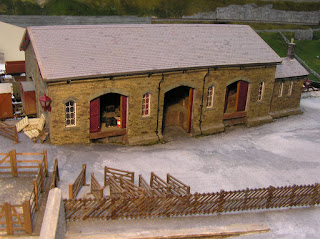 Almost seven years ago, Peter Johnson approached me to build three models for his growing OO/4mm finescale basement layout that depicts the sweeping curves of the Settle and Carlisle railway and its evocative, and sometimes bleak landscape around Wensleydale. Between then and now, December 2018, I have juggled my life between being a scratch builder and a regular visitor to one of Calgary’s hospitals; but, I have now finished the buildings, and they are set in place on Peter’s layout, “Hawes Junction”. The original buildings are situated in north-west England, these being Garsdale station waiting room in Cumbria, and Hawes station’s main building and goods shed in North Yorkshire. All are associated with the Midland/North Eastern cross-country branch that ran from Northallerton in the east, situated on the East Coast main line, to Garsdale in the west on the Settle and Carlisle railway. The Midland Railway and the North Eastern Railway met at Hawes but it was the Midland that
Post a Comment
Read more
More posts